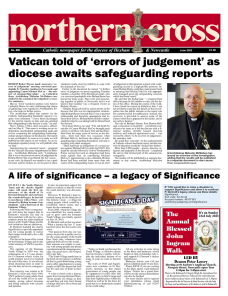 The Northern Cross is a monthly newspaper for the Christian community of North East England, in particular the Catholic diocese of Hexham and Newcastle. The first issue appeared in January 1956.

The newspaper relies heavily on the service of volunteers as contributors of articles and photographs, for the transport and distribution of the paper and sales at parish level.

The objectives of the Northern Cross are to: “advance Christianity in particular, but not exclusively, by working with and educating the public in the North East of England and to support the needs of the public by providing or assisting in the provision of information about available services for individuals and their families. It encourages a greater understanding of Christianity and provides its readers with a major source of information within the Catholic community and other Christian churches regionally, nationally and internationally.”

The Northern Cross endeavours to explain the position of the church in relation to current events and issues, to encourage Catholic readers to feel part of the diocese and to encourage greater participation in parish life. It aspires to provide an effective Catholic voice in the North East of England and to promote the Church and the Hexham and Newcastle diocese in particular, through news and general interest items. It also aims to promote contact with, and understanding of other religions.

The Northern Cross was given a Papal Blessing on September 11, 1965.

Send us your news

Links to our friends and supporters

For information about the diocese of Hexham and Newcastle go to www.rcdhn.org.uk/

Get social with us.